It CAN happen here

The following is an article from NPR about research published 10/2/08 in the journal Science by Jennifer Whitson.  Whitson set out to test whether people see patterns that aren’t there in response to a feeling of a lack-of-control.

It is with this in mind that I present the following:

“When fascism comes to America, it will be wrapped in a flag and carrying a cross.” — Sinclair Lewis, 1935

On November 20th 1942 the US ordered seizure of Nazi German banking operations in New York that were being run by… Prescott Bush, (grandfather of George W. Bush)(http://www.guardian.co.uk/world/2004/sep/25/usa.secondworldwar)

There has been a quiet transfer of power from President George W. Bush to Vice President Cheney.  The attempt now is to install a president who will die in office and who’s vice president is nothing if not the perfect public face of the puppet government.

Already, terrorist attacks and financial crisis have been used to transfer legislative/judicial power to the executive branch.  The idea is to move real control and therefore real accountability away from the president to unaccountable levels where no checks exist and where decisions have no consequences on the decision makers.  This shadow government is at the behest of the interests who have used their financial power to create wars and terror in order to manipulate democracy.  Now this shadow government seeks to create economic crisis and panic in order to redistribute wealth and concentrate power even further into the hands of the real sources of the currencies of nations.

America is founded on common ground, public space; on the idea of consensus, of debate, of freedom of life and work and belief.  The shadow government subverts this and weakens democracy from within like a hollow dead tree which will fall with the slightest breeze.   The declaration of independence itself makes clear that the experiment of democracy is to internalize the spirit of revolution within the government so that external and violent revolution is unnecessary. But the declaration also acknowledges that the people must be stewards of their own freedom and never allow the kind of shadow government which now controls us.  It is the right and duty of Americans, when the mechanisms of democracy have been subverted, to stand up and change the government.

Make no mistake about it, fundamentalists within both Christianity and Islam seek the great conflagration, both seek rapture in destruction.  It is in the interests of the controllers of the currencies to maintain a constant battle between these two groups in order to keep them both ignorant of and weak enough to not be able to challenge the status quo; their goal is actually to polarize the world. Divided, all can be controlled.  Our shadow government has the same addenda and the same owners as Al Qaeda. Confuse with lies, create fear with violence, and divide the population through sexism, racism, and prejudice.

Just as Jesus’ philosophy was co-opted and institutionalized to become the very thing which Jesus fought against; so the founding fathers’ philosophy of freedom was institutionalized and turned into the exact opposite of its intended spirit.  Throughout history each thesis or movement is counterpoised by its antithesis or opposite.  It is in the interests of the owners of the currencies to keep this antithesis balanced and profit from it.  The real question of any forward movement of history is whether the living spirit will continue to grow, evolve and create a greater synthesis or combination of the two opposites; or whether the point and counterpoint will remain locked in an un-winnable and mutually self-destructive struggle in which both sides fight to a draw.

Will Osama Bin Laden deliver another “October surprise” in the form of a video just before the presidential election to help Senator McCain get elected, just like what happened in 2004 in order to help drum up fear in order to re-elect George W. Bush?

Why were the Bin Laden family members in the United States cleared to fly out of the country in a private chartered jet after 9-11 when all other air traffic had been grounded? 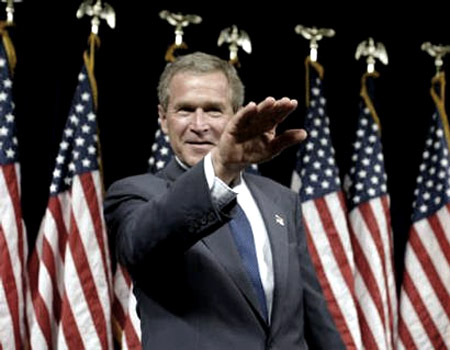 The last summer of George

With gas at $4 and no end in sight we are entering the final act of the tragedy that is the presidency of George W. Bush.  A true global pyramid scheme, the global consortium of banking and oil which has installed GW Bush and has controlled the agenda for almost 8 years is now in a profit reaping feeding frenzy.  The billions of people that walk the earth are the food for this cannibalistic machine of power and wealth.  As January 2009 approaches and with the assumption of a new president on the horizon, the last stages in the life cycle of this incarnation of the beast play out.  As billions of people starve the oil interests who directly installed GW Bush in the 2000 election take their fill.  The planned occupation of the Middle East continues to try and achieve its goal of connecting control of oil reserves and pipelines from Afghanistan and Iraq to the Caspian Sea.

Thinking of the state of current global commodity prices, foreign exchange rates, and debt markets one cannot help but ask how this state of economic affairs benefits those interests who stand to profit from high food and energy prices, a weakened US dollar, and a never ending military contract and defense operation.  Think of the US’ reaction after 9-11 and ask who stands to benefit from the Invasion of Afghanistan and the passage of the patriot act.  Think of who benefits from the US’ invasion and occupation of Iraq.  Ask how the son of Texas oil men with close connections to Saudi Arabian oil men benefits from oil prices at historical highs.  Ask how the son of a former director of the CIA, Vice President, and then President benefit from the continuation of the “war on terror”.  Ask how the son of the Saudi BinLadin Group and former CIA operative against Moscow benefits from bearing responsibility for the events of 9-11.  Ask who not capturing Osama Bin Laden benefits?

When viewed together and with the benefit of hindsight a picture emerges.  What more will the global interests reap in this final act?